I was delighted to be able to welcome the local Cubs and Scouts packs to All Souls on the eve of Remembrance day – last Wednesday – to spend some time at our War Memorial and to talk about its significance. In a great follow-up to the piece we published last week, local resident Martyn Day has written about the visit – of the cubs in particular – and the stunningly played (and very moving) Last Post we heard: 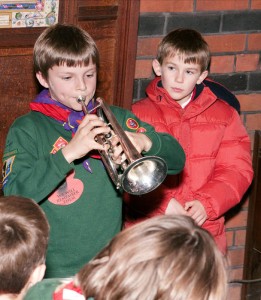 The bugler sent a call of high romance–
“Lights out! Lights out!” to the deserted square.
On the thin brazen notes he threw a prayer,
“God, if it’s this for me next time in France …
O spare the phantom bugle as I lie
Dead in the gas and smoke and roar of guns,
Dead in a row with the other broken ones
Lying so stiff and still under the sky,
Jolly young Fusiliers too good to die.”
ROBERT GRAVES

If ever a sound captured the sombre, reflective mood of Remembrance Day it is the high melancholic notes of the ‘Last Post’ – the military bugle call played to mark the end of the day. For 90 years nervous buglers across the world have stood up at Armistice, alone and unsupported, to evoke through their playing remembrance of all those who have died in war. From local war memorials to the fields of Flanders and to cemeteries and cenotaphs far and wide this has been the bugler’s privilege and test – and this year the awesome responsibility of a 10 year old Cub Scout from St. Margarets.

We always knew that ‘Tilly’ could play the cornet, he started the instrument in January last year, but few of us realised just how far he had progressed until Remembrance Day 2009 when he played ‘Last Post’ at the Cubs Armistice Day observance. The Pack, usually so restless and anxious to move on, stood straighter and quieter than they have ever done before. This year Tilly’s skills were called upon again when last month he went with his school, St Stephen’s, to the old battlefields in Northern France.

On the 13th October the children gathered at the Thiepval Monument in Picardy built to commemorate nearly 73,000 soldiers without known graves who were killed during the Battle of the Somme and here, in this solemn place, Tilly played the ‘Last Post’. A witness later wrote “He performed so wonderfully that several members of the public came up and said how touched they were by his performance.” A group of Canadians visiting the memorial that day asked if he might play again for their countrymen who had fallen in the Battle…and one soldier in particular, a young bugler who had been killed. Later the school party moved to an old trench system where Tilly played yet again, his music echoing over the battlefields where 94 years earlier, at 7.30am on the morning of the 1st July 1916, the soldiers of the British Army and their allies, with bayonets fixed, advanced towards the enemy. By the end of that day nearly 60,000 of them were dead or wounded. 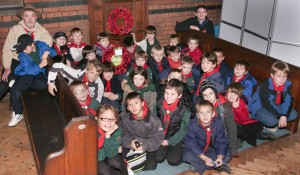 On the night before Remembrance Day Tilly played again in All Souls Church in St Margarets, this time for his fellow cubs from the 1st St. Margarets Cub Pack and the Vicar, Richard Frank. Together they laid a wreath on the memorial Roll of Honour which lists 86 men from our community all killed in the Great War; and together they walked home along the streets and past the houses where these men once lived. The next morning Tilly played for his school, St Stephens, where pupils and staff all observed the 2 minutes silence. The following Sunday, in the company of 11 year old trumpeter Adam Meyer, Tilly played again at the War Memorial in Isleworth – two boys honouring through their music the lost lives of thousands barely older than they are.

William ‘Tilly’ Thomas is just 10 years old and the great nephew and great grandson of soldiers whose name he carries and whose courage he respects. This is what he says..

The ‘Last Post’ is the first trumpet piece I remember hearing and I always wanted to play it and tried as soon as I had my cornet… I think I made up my own version for a start…it reminds me of my 2 great grandads, both named William who were in WW1… also of Uncle Will who allowed me to see the shrapnel in his legs from his wounds in WW2…

William used to regularly visit his Uncle Will until he died about 2 years ago. William would sit with him holding his arm, leaning on him and asking him questions about the war. Uncle Will wouldn’t say much about his wartime experiences. Perhaps it is enough to know that he was the only one of his regiment to survive. He loved seeing William and would call him ‘LIttle Will’. His mother said …
“It was a strangely touching sight seeing them sit together. Apart from liking the music itself William has lots of reason to feel that the ‘Last Post’ is a special piece of music.”

So if anyone should tell you that young people today neither know or care about Remembrance, tell them about Tilly, his friends at St. Stephen’s School and the 1st St. Margaret’s Cubs and the generation that they represent. They may be young but they’re not stupid – and the greatest stupidity of all is War.

The “Last Post” was used in the British Army during the Duty Officer’s inspection of sentry posts at the end of the day. The start of the inspection was marked with the “First Post”, the end by the “Last Post”, a time when soldiers could stand down. The practise was started in the1690s by British units stationed in the Netherlands. It was then called a ‘tattoo’ from the Dutch order “Doe den tap toe”, which meant that the taps of beer barrels had to be turned off and soldiers had to return to barracks.
Over the years the playing of the “Last Post” at day’s end spread throughout the Empire and became a regular part of the military routine. ‘Last Post’ was also incorporated into funeral and memorial services as a final farewell, symbolising that the duty of the dead was over and that they can rest in peace.